The Reciprocity in Photography: An Interview with Richard Kelly

Sitting down for an impressive latte at the South Side’s Big Dog Coffee (if you haven’t been, the intelligentsia coffee is worth the trip!), I had the pleasure of talking with Richard Kelly about his life in photography and his recent best-in-show win at our juried show Sides Unseen: Unique Portraiture. 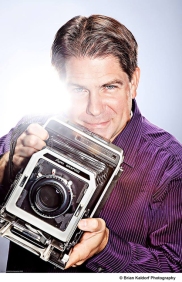 You likely recognize Richard as a current industry leader, a business and copyright expert, and an ardent photographic educator and lecturer. The journey began when Richard cultivated his own path at the young age of 11. When his parents denied him a camera, he cut grass and worked a paper route to earn enough money to purchase his own, a Pentax 35mm SLR. As Richard explained “I was able to buy a camera and got my first paid job right away.” The spark ignited a fire and he continued to pursue photography throughout his teen years, picking up paid jobs and learning from older friends who allowed him to come along on photographic outings.

Once he moved to New York City, he assisted for photographic giants Art Kane and Norman Mauskopf, among others. He landed his first independent photography job for a national magazine in 1988. Through the generous support of mentoring friends, he was able to utilize studios and equipment to take his career to the next level.

Pittsburgh has been lucky to have Richard as a leader in visual communications since 1993 and his early experiences have provided Richard the impetus to routinely embrace the beneficial role of educating and mentoring others, as a way to give back and to continually learn himself. As motivation he indicated what he is searching for is “the end of learning”, fully aware that one doesn’t ever stop.

When we began discussing the recent exhibition Sides Unseen: Unique Portraiture, which included pieces from his passport portraits series, there was a palpable energy shift. It’s clear the photograph and the people that he works with are at the very heart of what he does.

The passport portraits came about in an unexpected way. Richard was casually offered film and an idle passport camera by a UPS acquaintance, which then sat for months on a chair. One day he began experimenting with it on his daughter, Grace, realizing he had something to explore more deeply. “It got me thinking, raising questions about what makes a portrait.” This is the very question he poses to his students in his Pittsburgh Filmmakers portrait class, often with heated results. “Things can get quite argumentative. People have fixed feelings about what can constitute a portrait.”

Intuitively, he took this camera to the last day of his class, and limited the exposures to two per subject. He then scanned them to apply basic Lightroom adjustments and, if necessary, edited further in Photoshop, spotting the main subject area or adjusting film inconsistencies, which can be a common discrepancy with this type of Polaroid film. He planned to give each subject one of the two exposures and keep one for himself.

His winning photograph Heather pushes the portraiture medium by playing on our visual senses. The images appear to be identical, yet they are definitely, subtly, different. As Richard explains, “There is an intriguing quality about the two images side by side. They are of the exact same moment in time and yet there is something different about them.” He is excited to explore this area further, investigating the philosophical question of time and how you can slice one moment of it with photography, and yield different results in the same instant.

Whether taking inspiration from other photographers, visiting used bookstores (a favorite hobby), or just walking down the aisles of a local hardware store (an activity to inspire a change in viewpoint), Richard intensely studies the people and places around him. “If you take a wrong turn, I mean purposefully take it, you can discover something you never knew was there.”

That’s solid advice to any photographer. I’m excited to see what viewpoint he introduces next, fully aware that, with Richard, I need only to ask. His reciprocal commitment to educating, mentoring and inspiring others is a true enrichment to our local photographic community.

From one photographer to another, Richard Kelly’s short list:

Go to lens: Canon 85mm 1.8. He recently sold most of his lenses, so he is working with a few fixed lenses in his bag, renting others as needed.

Favorite photographic accessory: The camera bag. “Although I think of reflectors, it’s the camera bag that I love. I have more bags than a man my age should.”

Current books on nightstand: After Photography by Fred Ritchin and The Ongoing Moment by Geoff Dyer.

Favorite place to find inspiration in Pittsburgh: Walking the neighborhoods. It is his favorite way to explore any city. He plans to spend time exploring the West End next.

One piece of advice that he would give to his youthful self: To be less arrogant. “I didn’t realize what it really took to run your own business. Money-wise, I mean.” After working with famous photographers in NYC, he was naïve about a photographer’s lifestyle and the income it took to get started. He thought he would just start working and catapult to the top of the field, unrealistic about the investment that it takes to get there.

As a food lover, I always have to ask…Favorite Pittsburgh restaurant: Dish, Pittsburgh’s Southside (http://www.dishosteria.com/). “If I could have any kitchen, it would be Michele’s kitchen,” he proclaimed, referring to owner and friend Michele Savoia’s amazing kitchen and cuisine.